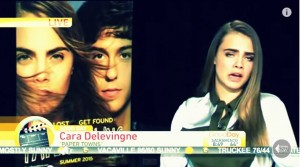 “Wow, she was in a MOOD!!” That was the reaction of the local US TV anchor in Sacramento, California when Cara Delevingne went off the air after an interview to promote the film Paper Towns in July 2015. Faced with some fairly inane questions of the ‘did you get a chance to read [the book] or do you even have time to sit and read?” variety, Cara appeared unsmiling and gave answers that were initially sarcastic – “No I never read the book or the script actually, I kind of winged it” – but perhaps because of the straight-faced way in which they were delivered, the Sacramento hosts seemed to take offence at her ‘lack of energy’ and cut the interview short, telling her she looked tired and suggesting she go off and get some rest, and maybe take a Red Bull energy drink. To be frank, Cara probably was tired during this morning TV interview after the movie’s premiere the night before, one of a succession she will have had to give during the typical movie-promotion junket. The fact she wasn’t talking with pumped-up energy like the TV hosts asking the questions was taken as an insult. The lesson for anyone appearing on television is that a TV interview is an acting job – you have to act as though you’re happy to be there even if you’re not, you have to put energy into it even if you feel wiped out, and you have to smile and look friendly even in the face of chippy questions. After all, it’s usually only for three minutes or so. Oh, and by the way – sarcasm almost never works, especially for an American audience; they will take you literally, or just think you’re being weird.