It’s something that has probably been mentioned by every media training coach up and down the land to every one of their clients, since what feels like the dawn of time. Don’t talk in jargon! When dealing with the media, use language that everybody will understand, or at least explain your jargon clearly if it really needs to be introduced into the conversation. However, despite these best efforts, the incomprehensible acronyms and abbreviations keep on sprouting up, apparently as tricky to eradicate as Japanese Knotweed. A couple of things particularly caught my eye this month. First, mention in The Times of an academic report from the Oregon State and Texas universities which suggested that corporate jargon is bad for staff morale, with people alienated by organisational gobbledegook and woolly mission statements. No real surprise there. 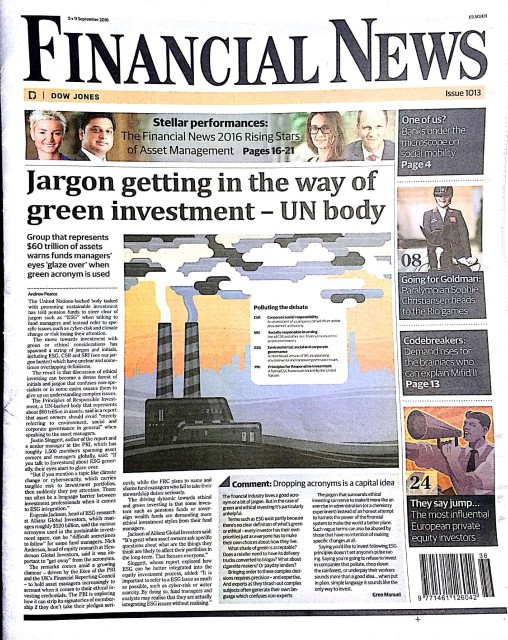 Then came an example of the real, tangible damage jargon can do to an industry or sector. Financial News, the parish magazine of the City of London investment community, led with news of a claim by a UN-backed body that jargon is getting in the way of green investment. Investors are apparently avoiding environmental or green-themed investing – even if it is what they want – because they don’t understand the variety of acronyms in common usage, such as ESG (Environmental, Social and Corporate governance) or PRI (the UN’s Principles for Responsible Investment). The report’s author is quoted as saying: “If you talk to [investors] about ESG generally , their eyes start to glaze over. But if you mention a topic like climate change or cybersecurity … they suddenly start to pay attention.”

The problem usually is that people in almost every industry – investment, tech, defence to name but three – tend to spend most of their day talking to other people who use the same lingo – so the jargon is a helpful shortcut. For them, it becomes a natural part of the language. But as soon as they need to communicate externally they find it hard to shake off the habit. Frequently they do not even realise that their familiar terms may be meaningless to the rest of us. So if you have to communicate to the media, think more about how you would explain something to your non-expert but perfectly intelligent next-door neighbour (or an old friend in the pub if you prefer), rather than to a colleague in the office. The key is to be clear in your own mind what your external message on a particular topic or question, as opposed to the usual internal message. The points you would make will probably different, and the way you explain it almost certainly should be. Get into this habit and journalists will be particularly relieved that they have finally found someone who can explain things clearly, while you in turn will be happy that your points are more likely to be accurately reflected.