The big corporate communications failure of the past month has been the United Airlines overbooking fiasco.  CEO Oscar Munoz was last week hauled in front of a Congress committee to answer awkward questions (“Why do you hate the American people?”) about the airline’s practices in the wake of the incident, in which security officers forcibly removed a randomly selected passenger, Dr David Dao, from overbooked flight 3411 from Chicago to Louisville.  Dr Dao lost teeth and sustained a broken nose; passenger videos of the episode went viral, United hit the headlines and became the butt of jokes worldwide.  So what are the lessons for other big companies in the public eye, in this social media era? Coincidentally, new YouGov research has suggested that over a fifth of consumers are willing to boycott a brand following a scandal or negative press.  Real money is at stake here. 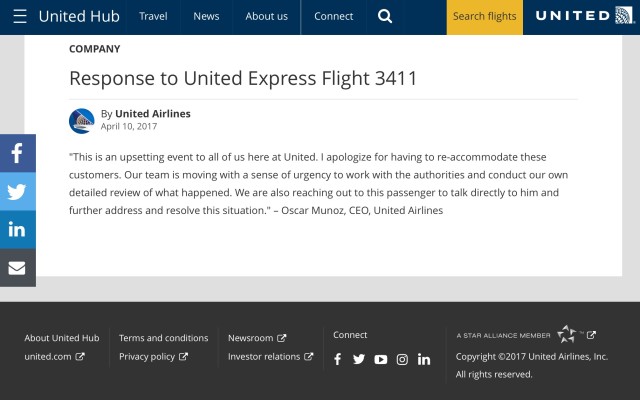 United got a number of things wrong, both operationally and with catastrophically poor communications in the early stages.  For example, why the sudden last-minute requirement to get its flight crew to Louisville, which is what led to the seat shortage In the first place?  Why wasn’t an attractive enough offer made to ensure there were volunteers willing to be bumped off the flight, rather than having to randomly pick a victim who was already on board?  Why the lack of proper guidelines on how officials should proceed if a passenger is unwilling to give up his or her seat?
We have all come across companies from time to time which appear to have bad practices, for example in customer service, but seem to get away with it.  In the end it usually catches up with them, with some sort of high profile fail, but by this time the bad habits have become so ingrained that everybody is caught by surprise.  You hear phrases such as ‘we’ve always done it this way’ or ‘nobody else has complained’.  I think United fell into this category. Everyone knew its slogan “Fly the Friendly Skies” was just that – a slogan, rather than anything that actually related to its day to day activities.  The blinkered approach was so ingrained that the initial reaction of CEO Charlie Munoz was to back the way staff had handled the incident and complain about the belligerent behaviour of Dr Dao, as he resisted being dragged off the aircraft.  His initial communication to staff – and this is almost unbelievable – maintained that “our employees followed established procedures for dealing with situations like this”. Really?!
The first lesson is of course that in the social media age, organisations need to think even harder about how their procedures, whatever their internal logic, will look like from an external perspective, to minimise the likelihood of a bad customer experience going viral.  The second is that when things do go wrong, don’t compound it by giving a tone-deaf PR response.  Mr Munoz’s early statements looked as though they had been drafted by a committee of lawyers and had no humanity about them; they were the target of much social media mocking.  To minimise the impact of Trial by Twitter, use real words rather than euphemistic jargon such as ‘re-accommodated’ when ‘forcibly removed’ would have been more accurate.  When we coach company spokespeople in media training sessions, one of the most frequent failings is that they often don’t even realise how inward-looking their language often is.  It’s then vital to demonstrate genuine contrition and explain what you are doing to sort things out.  Mr Munoz belatedly set off along this road with a grovelling interview on ABC’s Good Morning America, but this was too late to stop half a billion dollars or thereabouts being knocked off United’s market capitalisation, and the loss of his expected promotion to chairman.  Good communication skills are vital to a company boss, but you have to get the culture right in the first place.
This post was updated on May 8