How did Virgin Trains managed to garner such a huge wave of public
support in its attempt to keep its hands on the lucrative west coast
rail route?  Once again Sir Richard Branson has demonstrated that
smart use of the media really can make a difference.  Since rail
privatisation in the 1990’s plenty of franchises have changed hands,
but nobody has gathered such public and parliamentary support for a
re-think of what would normally be a straightforward handover to
FirstGroup, based on the highest qualifying bid.  It is particularly
remarkable given the long-running criticisms of Virgin’s high peak
fares on the route, and First’s promise to cut some fares and provide
additional services to destinations such as  Blackpool and
Shrewsbury. 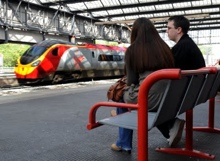 What I thought notable was the way that Virgin managed to set the news
agenda from the moment the award was announced, leaving First so far
on the back foot it was practically horizontal.  A forceful Virgin
spokesman was on hand at Euston for the breakfast TV crews with a
powerful ‘we wuz robbed’ message, and Sir Richard provided a
headline-grabbing quote that the bid process was ‘insane’.  Where was
First?  Nowhere that I could see.  The company has a poor reputation
with passengers compared to some operators, though it is improving,
while newish Chief Executive Tim O’Toole has a strong reputation in
the industry.  So why wasn’t he, or a well media-trained lieutenant,
out there banging the drum with a good news story about all the new
services, cuts to Virgin’s extortionate peak-time fares, and so on,
to anyone who would listen?  Beats me.  When Mr O’Toole eventually
did appear on our screens, the Virgin agenda that he’d made an
unsustainable bid that would be bad for passengers, staff and
taxpayers was too well-entrenched.

It’s probably a long-shot to expect Virgin to succeed in its legal fight to stop the First deal from being signed, but had he not succeeded in whipping up such  public support, Sir Richard might not have been encouraged to press ahead with his challenge in the first place.  Even if he loses he will have cost First considerable time, money and certainty.  If First had communicated its ‘lower fares and better services’ message more speedily and powerfully, it might have had a done deal by now.   OCTOBER 3 UPDATE:  How extraordinary that the whole bid process is to be re-run – I didn’t see that one coming!  And to think that  if Sir Richard hadn’t been emboldened to make the legal challenge, none of the flaws in the process would never have come out…