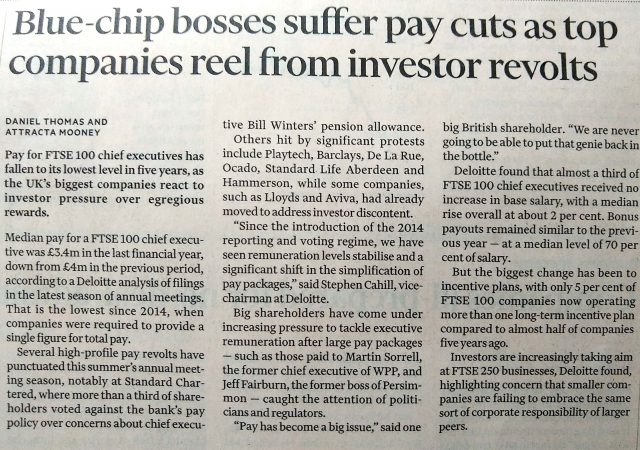 The Financial Times reports that 2019 has seen a record number of revolts at big company Annual General Meetings on the issue of executive pay and pensions.  This means company spokespeople need to be much better prepared to deal with questions on the topic when they are being interviewed, as they are more likely to crop up than previously;  this applies to those lower down the corporate ladder, as well as to Chief Executives.  The issue has continued to rise up the agenda in the wake of controversies such as the record £75m bonus awarded to Persimmon’s Jeff Fairbairn, and more recently the jumbo pension pots set aside for a number of company bosses.  The extent of the pressure from shareholders is reflected in figures from the accountancy firm Deloittes which suggest average CEO pay for the FTSE100 has actually fallen by 13% in 2019.
Some people running companies will feel that questions such as “how does your boss justify a remuneration of £xm at a time when jobs are being cut?” are an impertinence, but for publicly quoted companies they are legitimate, though doubtless  unwelcome.  A brush-off response such as “that’s a matter for our remuneration committee” or even worse, “no comment”, will no longer wash.  Something more substantive is needed.
If the boss him/herself is asked the question, it is fair to point out that others set the pay figure, but there should be some decent reasons given why the package is deserved.  Others will judge whether these are valid, but the response needs to be finely judged – anything over-defensive or over-egotistical will create a very poor impression. If other spokespeople are asked, a safe route is to have a quote up their sleeve such as ‘it’s not a matter for me, but if you look at what our Chairman said at the AGM, he pointed out that … ‘ (or whatever).  Senior management can hardly criticise them for simply repeating a point the big boss has already made.
Ask us about our tailored crisis and ‘reputational issues’ media training for senior spokespeople