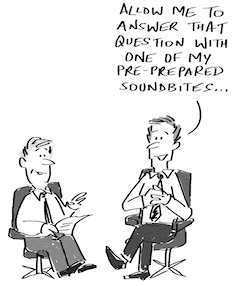 Smart organisations know that media training has real tangible value, but from time to time it comes in for criticism for creating inauthentic over-spun spokespeople whom nobody believes. I will come to the tangible value bit in a moment, but first the brickbats: I was recently asked to write a short justification for Scotland’s Sunday Post newspaper after comments by the UK’s youngest MP, Mhairi Black of the SNP, who told the Commons she had agreed to go along to some taxpayer-funded media training. This made her realise that the advice she was given “was just what the government is doing all the time – changing the subject whenever a tricky question gets asked.” If Ms Black is saying that coaching of this nature should not be about learning to avoid answering the question, then I agree with her – there is plenty of bad media training about. Instead, it should be about helping your clarify what you actually want to say, giving you the tools to find the most effective way to do it, and enabling you to be as authentic and credible as possible when you or your organisation has come in for criticism. The great majority of people find it extremely hard to do this without help – Roger Federer or Andy Murray are far better tennis players than you or I but they still rely on a tennis coach. This is what I wrote for the Sunday Post:

Effective media training vital for MPs, MSPs and anyone else who has to appear on radio and TV, or talk to reporters. Done properly, it can help you get to the point, avoid jargon and look and sound natural in what can be a very challenging environment. Journalists and editors have their own agenda, so it’s only fair that the rest of us are equipped to get across what we actually want to say, and perhaps avoid being trapped by leading questions. The problem arises with politicians who are poorly media-trained, and told ‘it doesn’t matter what the question is, just get your key messages across.’ I always tell those I’m coaching that if there’s a difficult issue they need to find a way to deal with it – an obvious deflection just makes journalists and TV audiences cynical.
.
What about companies, public sector organisations and charities? A report last month from the consultancy Reputation Dividend emphasises the financial impact of maintaining reputation, and of course effective media handling plays a big part in this – if you don’t believe me, look at the sharp falls in some of the banks share prices after recent scandals, the pasting the train companies and Network Rail get whenever there is passenger disruption because of over-running engineering works, and the fate of the charity Kids Company. Where regularly-refreshed media training improves public reputation of a big company, this has a very tangible value. The survey concludes that corporate reputation currently accounts for £790bn of shareholder value in the FTSE 350. This is an extraordinary figure; an increase of £170bn compared to last year, and equivalent to over a third of the index’s total market capitalisation. The study shows how reputation value is created when recognised strengths and qualities of individual companies coincide with investor interest. It suggests that the single most valuable component of corporate reputations this year is the impression of “financial soundness”, while the economic impact of ‘corporate responsibility’ grew more than any of the other headline factors tracked. “Looking ahead,” says Reputation Dividend, “with volatility set to continue, not least because of the forthcoming EU referendum, the winners over the next twelve months will be those companies that focus on the operational and messaging priorities which support continued confidence through turbulent times. Reputation may be intangible but it has a very tangible value.” Indeed.
Of course the key is that while spokespeople need to be well-practised, they do have to be authentic, and as transparent as possible about the weaknesses of their organisations, as well as the strengths. So let’s put the era of glib pleased-with-themselves corporate spokespeople behind us and get some clear, open communication from big companies – then we might start to trust them a bit more, and media trainers will really have earned their spurs.