Is this the week when the old order in the media really changed?  We have seen an extraordinary escalation rather than diminution of President Trump’s battle with mainstream broadcasters and newspapers, while at home Westminster’s Culture, Media and Sport Committee said it is so concerned about the so-called ‘fake news’ phenomenon that it wants to investigate concerns about the public being swayed by propaganda and untruths.  It may be tempting to ignore all of this and hope good sense will prevail, but there are key implications for anyone who is contact with the press and TV in the UK, as well as on the other side of the Atlantic, worried about their credibility.

Within hours of the new President’s Inauguration, White House Press Secretary Sean Spicer angrily attacked reporters for what he called ‘falsehoods’ over the crowd numbers attending the event, even though the easily-provable facts were clearly not on his side. One commentator compared his ill-tempered address, even on such a minor topic, to the propaganda techniques of the Soviet-era Kremlin and the Nazis. 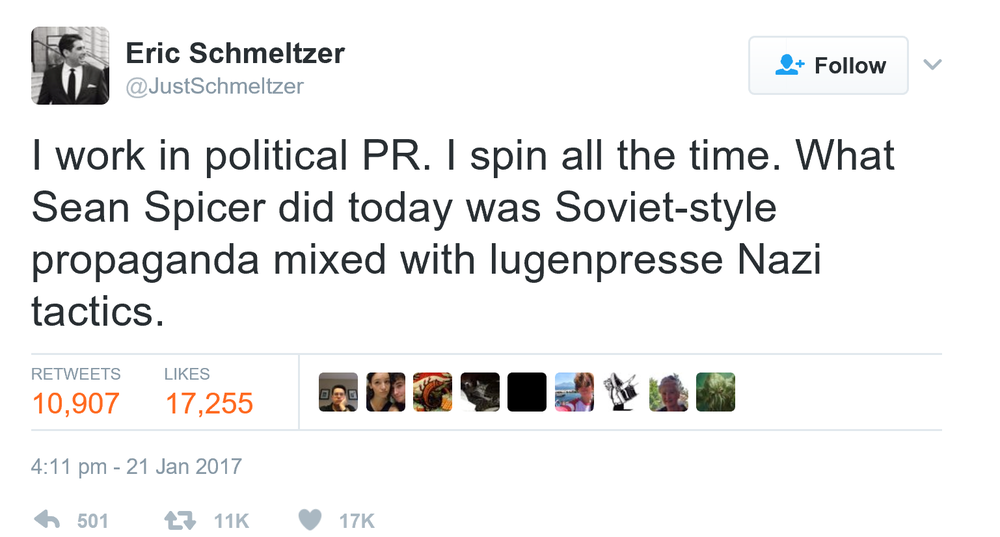 To make intentional enemies of the White House Press Corps is surely a huge mistake, and one which the new President and his team will inevitably come to regret. The new approach has shown the power of social media, with Trump’s extraordinary and sometimes bizarre twitter feed, but it has also demonstrated the risks; he cannot blame media intermediaries for misrepresenting him, when he is plainly representing himself. Meanwhile, just to up the ante even further, the President’s campaign manager Kellyanne Conway appeared on TV the following day, describing Mr Spicer’s falsehoods as merely ‘alternative facts’, for which she was much lampooned.
So is this the new reality in the media world, where anything goes, however tenuous its link to reality?  For the moment, from across the Atlantic, we may have to put up with acres of ‘them’n’us’ claims and counter-claims by Breitbart News and the Office of the President on the one side, and the massed ranks of the New York Times, CNN, Huffington Post etc. on the other. As MPs fear, this trend may be heading for the UK, with Jeremy Corbyn-supporting The Canary and the newly-launched pro-Brexit site Westmonster.com.  However I think this very unstable situation with the American media cannot last indefinitely.  The  new President’s regime certainly wants to put pressure on the media to toe the line and ‘be made accountable’.  But this is one of those wars that neither party can win – it can only damage both sides. The President’s high-aggression tactics will not appeal far beyond his core supporters; similarly in Britain the highly-politicised news websites remain, and I believe will continue to remain, very much a minority sport.
In the current febrile atmosphere it is perhaps more crucial than ever that consistent, thoughtful, trustworthy voices continue to make themselves heard among the shouty folk. That’s why it is important that business leaders should continue to engage.  However they will have to take even more care than usual to express themselves in a thoughtful way, so they cannot be accused of trying to score political points. They will need to double-check their facts but still not be afraid to speak out clearly when politicians make bad decisions, eg on free trade or Brexit, so long as their points are fact-based; in the long term, they are the ones who will emerge with credibility and credit. The rules may appear to have changed for the moment, but gravity always reasserts itself.

An earlier version of this piece appeared on Huffington Post.