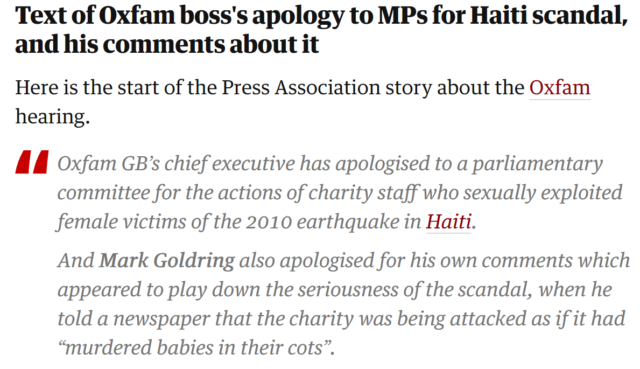 If your organisation gets it wrong, it’s important to apologise – but not the way Oxfam did it, after the revelations of inappropriate behaviour by members of its team in Haiti, and elsewhere. What can be learnt from this?

Oxfam’s boss quickly apologised for its failings, after The Times broke the shocking story of sexual exploitation of female victims of the 2010 Haiti earthquake by members of the charity’s team sent in to provide aid. But in a widely-criticised Guardian interview Mark Goldring hit out at Oxfam’s critics, appearing to suggest they were making too much of the issue – saying they were “out of proportion to the level of culpability”. He later had to apologise for the apology – appearing before a committee of angry MPs, he was forced to admit he had appeared to play down the seriousness of the scandal. There are no easy ‘get out of jail free’ cards if your organisation gets it badly wrong, but how do you give it your best shot?

KFC took out a witty ‘mea culpa’ advert after its chicken shops ran out of chicken, but sadly a flippant option is hardly appropriate in the wake of the charity scandals.

First, an apology is the right thing rather than trying to brush it off or keep quiet. It needs to be done as soon as possible – not left to when there’s no alternative. Short term reputational damage will be much less than the long term damage if it looks like there’s been a cover-up.

2. The apology needs to focus not just on victims but on clear evidence that the organisation has learnt, and is determined to change, preferably to lead the change in its sector.

3. In terms of what action is appropriate, over the top is better than underwhelming. Think back to the famous Tylenol painkiller crisis more than thirty years ago, when someone in Chicago laced a number of capsules with cyanide, killing seven people. Tylenol was a hugely profitable trusted brand, but Johnson & Johnson removed the whole Tylenol range from every store in America until a new type of triple-safety tamper-proof packaging could be introduced. This cost many millions of dollars but reassured the public and saved the brand, with people seeing the company as the unfortunate victim of a malicious individual.

4. The media need to be deftly handled by the Chief Executive, with the right mix of humility and determination – the overwhelming impression being generated that ‘we’re determined to change and here’s the evidence of what we’re doing’ rather than ‘we got it wrong, oh dear, don’t be so beastly to us’. This takes a lot of practice and high-level media training, which needs to be carried out well before any sign of a crisis breaking.

More on our media and crisis media training