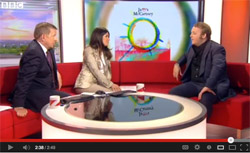 This BBC Breakfast interview with James McCartney, son of Sir Paul, was described by some newspapers as ‘excruciating’. This is an exaggeration – it was just dull, disappointing and a bit awkward; but it demonstrates clearly why if you give a TV or radio interview, you have to put heart and soul into it – otherwise it’s best not to bother. McCartney, attempting to promote a new album, gives little away in his mostly terse and lacklustre answers – his manner suggests he is unhappy to be there, irritated by the (predictable) questions about his father and famous friends. It comes hot on the heels of the equally counter-productive Rhys Ifans interview with Janice Turner in The Times, this time hoping to sell a new film. Mr Ifans was described in the second sentence of the piece as a ‘walking disaster’ as an interview subject; things went downhill from there.

Sometimes company spokespeople wish they didn’t have to do interviews either, especially when there is bad news to impart. But the same point applies – if you let your discomfort or irritation show, that will make the whole thing a lot worse. Essentially, as we explain to people in our media training courses, an interview is an acting job. It’s by its nature a staged conversation, so it’s never likely to feel all that natural. You have to act as though you’re delighted to be there, even if it’s 6.15 in the morning and you feel zonked. You have to convey energy and passion for your subject, even if in reality these may feel somewhat lacking. Where possible you have to be entertaining – after all the audience is not forced to listen. You have to understand the rules of the game and play by them – or don’t play at all.

An interesting take by ex-editor Mark Ellen on the Ifans interview and the changing nature of celebrity interviews and PR control can be found here.