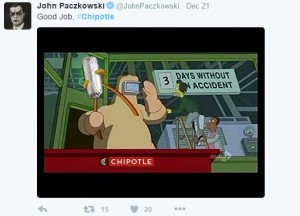 Few people in the UK know the Chipotle fast food brand—most don’t even know how to pronounce it (Chip-oat-lay)—but in the US it’s a big deal, and it’s in big trouble. Chipotle was the first national chain to successfully pioneer healthy eating in a fast-food environment, with 1,800 restaurants and over $4bn turnover. Until a few weeks ago, it had a glowing reputation; its proud motto, ‘food with integrity’. Now though, Chipotle is in the middle of what one commentator called a ‘fiasco vortex’, with a succession of serious food poisoning incidents over the past four months. More than 500 people in America have been affected at the company’s restaurants across the country, with outbreaks involving norovirus, salmonella and E. coli—the latest coming to light just four days before Christmas. The company’s sales and profits have inevitably been hit hard, and the shares are down 30% over the year. Chipotle is now changing its cooking methods to make it ‘the safest place to eat’ yet the sources of the various outbreaks remain unknown. Its media handling of the crisis has been widely criticised, with CEO Steve Ells leaving it until last month before making a single TV appearance to apologise, while there was little in the way of pro-active social media, leaving Twitter to an unending stream of sarcastic posts such as those illustrated. Chipotle’s CFO even blamed government agencies and the media for ramping up the scare. 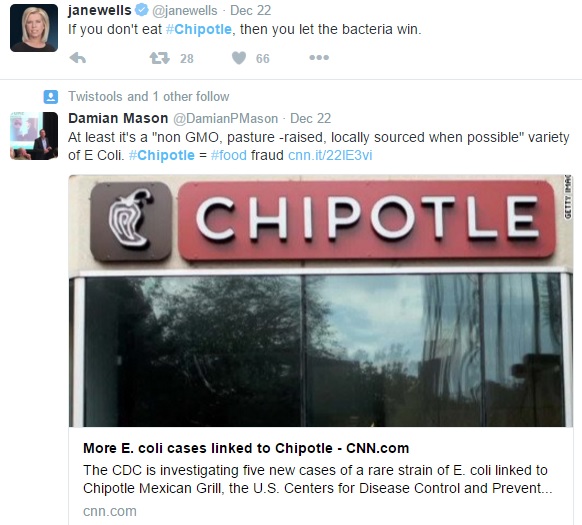 So how does a company recover from such a multi-pronged, ‘oh-no-not-another-one’ crisis? Incidents like these would be bad enough for any food company, but particularly so for Chipotle, as it has based its entire branding and marketing stance on setting much higher standards than other chains, boasting of its naturally-reared meat and fresh, unprocessed local produce, with open kitchens in its restaurants. This has made the backlash worse, with a side order of schadenfreude.

The first lesson is: don’t set yourself up to be morally superior to others, if you aren’t really. The idea that you will be protected from the worst of the consumer ire if you have built up a reputation as a ‘trusted brand’ seems to be optimistic at best. In fact, critics may take particular pleasure in puncturing the balloon. The second lesson: don’t blame the government or the media for your own problems. It makes things even worse.  Third: even if you do many of the ‘right’ things in dealing with a crisis (the company closed down affected restaurants for a thorough sanitising, re-trained staff and is overhauling its procurement processes), don’t expect the fuss to die down quickly. You can’t cover up for what have now been revealed as inadequate processes by ‘good PR’. You have to make real changes in the way you do business, so that new elements of the crisis do not keep hitting the headlines. The good reputation Chipotle had previously built up over a period of years should help it recover more quickly once things are put right, but this will still take time, and some luck. It will never be as smug again.