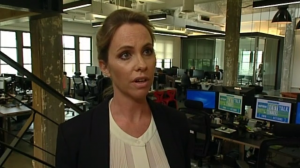 How do you face up to attacks from the media over wrongdoings at your company, which occurred long before you took over as boss? That was the dilemma faced last week by Wonga’s new MD Tessa Cook. After the departure of the company’s founders, she was left to take the flak after an FCA investigation found that in the past, customers who were behind with payments were sent fake legal letters to intimidate them into repayment. In a series of TV interviews such as this one for ITV News , Ms Cook managed to keep her cool under sustained attack, and wisely did not in any way try to defend the indefensible – instead apologising profusely and doing her best to make it clear that this was something in the company’s past rather than its present. However, when asked whether Wonga founder Errol Damelin had been aware of the practice, she repeatedly used one of the phrases that grates on me more than almost any other in a radio or TV interview – ‘I’m not here today to talk about … I’m here today to … ’ You hear the phrase on Radio 4’s Today programme from time to time, when under-fire company spokespeople have run out of anything else to say. My response when any of them say ‘I’m not here to talk about ..’ is ‘oh yes you are’, if the interviewer and the audience think it’s relevant. Instead, Ms Cook could at least have come up with something less defensive-sounding when asked about something she simply wasn’t able to answer, such as ‘I can’t speak for Mr Damelin, this all happened a long time before I joined the company,’ – and then continued with her abject apology.