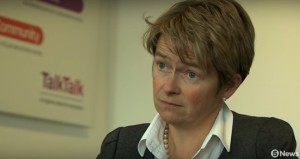 Perhaps the first rule of giving media interviews in a crisis is to be clear what you’re trying to achieve, and what message you are trying to get across. In the case of the broadband and phone company TalkTalk, the objective in the wake of a major data hack should have been to reassure customers so far as possible, until the full facts about the extent of the loss became clear. The company’s Chief Executive Dido Harding, or to be more accurate Baroness Harding, is to be congratulated for facing the music and being willing to deal with the awkward questions, unlike some company bosses who, given a similar situation, would have hidden away in their ivory towers. But it is a big risk for corporate reputation to give too many interviews, over too many days. It means customers will identify the problem very much with you personally, rather than with the brand, and it means you are more likely to find yourself giving information which may not be completely accurate, which is one of the accusations in this case.

TalkTalk should have had other senior managers, well media-trained, who could have taken some of the strain. It is also vital on TV to come over as in control of the situation rather than at the mercy of events – a big task if you are under huge stress and have had very little sleep. However, hair out of place and appearing harassed a is not a good look for CEO’s, whether male or female – it only makes viewers worry that you’re not coping.

If handled correctly, the media can be an extremely effective way of getting across information to customers, investors and staff, much more quickly than trying to contact them all individually by email or any other method. If only the message had been clearer, and more reassuring. As the respected financial website Motley Fool put it, “customers and investors were not impressed by TalkTalk’s bumbling attempts to find out and tell us what had happened, and the share price plummeted in the days after the news broke”. The damage was done right at the start, when Baroness Harding was unable to confirm to Radio Four’s Today Programme whether customers’ data was encrypted or not – this already sounded more like a failure of management than of media management.

Rather than the message continually being ‘we just don’t know’ what data has been lost/whether it was encrypted, she should have been able to convey that the company had a clear policy of data encryption, and followed all the appropriate legal guidelines – “at this stage it’s too early to speculate exactly what information has been lost”. As it was, the impression was initially conveyed that all customer information had been stolen,and within a day or two there was talk of jihadis and ransom demands; this fanned the flames of fear and speculation over the period before the eventual arrest of a 15-year old from Northern Ireland.

So the lessons are: have a clear message which you keep repeating, which will reassure customers so far as possible; make it clear what steps you are taking to deal with the situation; don’t speculate, and don’t feel you have to be the sole face of the company.