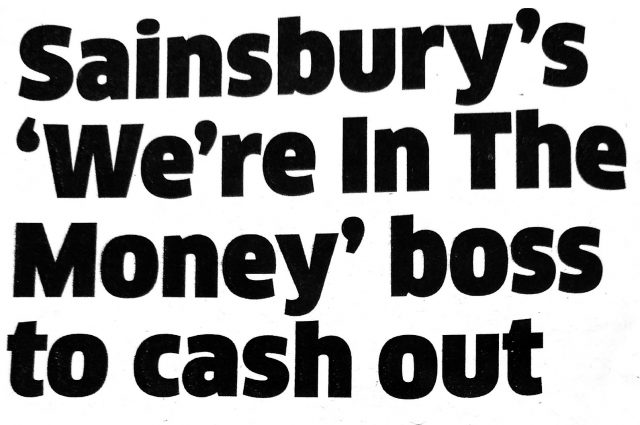 Sainsbury’s boss Mike Coupe was the subject of much derision when he was caught on camera in 2018 singing ‘We’re in the Money’ to himself while sitting in a TV studio between interviews.  Even when he announced his departure from the company a few days ago, the faux-pas was mentioned in almost every newspaper report, and even made the headline in the Metro – “Sainsbury’s ‘We’re in the Money’ boss to cash out”.  It’s all  many people will remember him for.  The song choice was pretty insensitive, bearing in mind he was talking about the (now abandoned) merger with ASDA, which would have earned him large bonuses but doubtless caused big job losses among staff.
Mr Coupe’s explanation was that he was simply caught in an unguarded moment, trying to compose himself before his next interview.  In fact, the principle here is absolutely on the money (sorry) – he had the right idea.  But is there a better way to  frame yourself effectively for a broadcast interview, without embarrassing yourself?  It’s certainly  something we talk about in our media training courses.
The first thing is to practice out loud the key points you want to get across, until they are fluent – just do it in private please.  Once you are in the studio, take some deep breaths to calm any nerves, and some sips of water to lubricate your throat.  Adjust your seating position until you are sitting up straight, ideally leaning forward slightly – comfortable but alert.  Stay aware of what your body is doing, and try to stick to this position rather than jiggling around;  a certain amount of hand movement is fine but don’t let it become distracting.  Remember you should be ready to keep looking directly at the interviewer, avoiding that nervy ‘eyes darting around’ look.  (If you are doing a remote or ‘down the line’ interview your gaze should be directly into camera).   You are now in “performance mode” – a state of heightened awareness that suggests you are ready to hit the ground running when the interview begins.  If you can have all this firmly in mind at the start, then during the interview itself your brain is free to concentrate on answering the questions as effectively as possible, and getting your points across.  With any luck, you will be remembered for giving a good interview, rather than for something that happened before the interview even started.