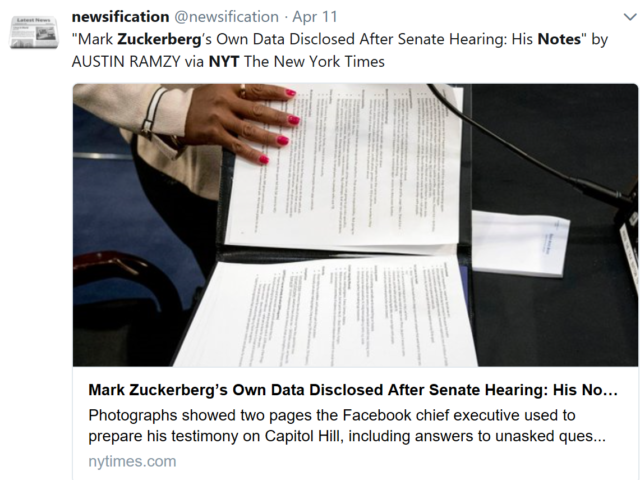 What can we learn from Mark Zuckerberg’s much-publicised grilling before Congress, over the Cambridge Analytica data breach? The Facebook founder was deemed to have broadly survived the two-day ordeal, partly helped by the low-ball nature of many of the questions. In fact, on many measures he performed poorly – he looked and sounded robotic, for example beginning every response with Senator/Congresswoman/Congressman to replace his usual habit of starting answers with the word ‘so’. He was unable to answer a lot of the questions, constantly responding ‘My team and I will get back to you on that’. However, he did show remorse, apologising and taking full personal responsibility – something he should have done a lot earlier. Critically though, he was extremely well prepared. An AP photographer managed to catch a sneak peak of his notes when he had left them open during a break in the proceedings. They show his team had anticipated a wide range of possible lines of attack from the elected representatives, done the media training and had his ‘key messages’ all ready. That printout, on a few sheets of A4, is probably what saved Mr Zuckerberg from a much worse fate; Facebook’s market capitalisation was around $23bn higher at the end of the hearings than it had been beforehand, as markets sighed with relief that the company had not been holed below the waterline. So the key lesson is that however clever you are, or think you are, a big interview or appearance such as this is won or lost beforehand as much as during the event. Never ever think you can wing it.

Incidentally, how did Facebook disseminate its apology ads for the Analytica data breach? In the good old dead-tree press – which remains the place for serious news and content, and the way to reach investors and opinion-formers.