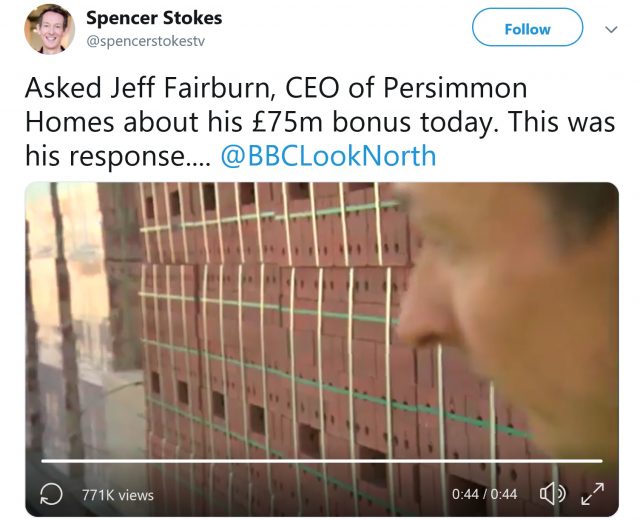 It rarely just rains .. the problem with a corporate crisis or a badly handed media issue is that you can’t rely on it to go away once the fuss has died down. It puts your company in the spotlight and almost invites journalists and their readers to come forward with any similar problems they’ve had, which otherwise wouldn’t have seen the light of day. Once the inquest had finished over the Pret a Manger unlabelled baguette which killed an allergy sufferer, a second ‘Pret Death’ soon hit the headlines, and you can be sure journalists and news agencies (as well as social media) will be on the lookout for the slightest issue suffered by any future consumer of Pret products.  The company was felt to have handled the allergy issue poorly, by ignoring warnings of the problem, and waiting months before apologising to the family.

This week Jeff Fairburn, the generously-remunerated boss of Persimmon Homes, thought the row over his record-breaking £75m annual bonus was over. It wasn’t. The opening of a new brick factory in Doncaster, which for most companies would have been a nice piece of good news (investment, local job creation etc) turned into a media catastrophe, as Mr Fairburn thought he could avoid any bonus-related questions. As if! Any journalist worth his or her salt would feel duty-bound to raise this issue – it wasn’t ‘new news’ but as the CEO had tried to avoid commenting on it up until now, this was an obvious opportunity. It’s extraordinary that Mr Fairburn seemed to be caught unawares and terminated the interview – which promptly went viral, having been viewed the best part of a million times at last count. The Persimmon boss seemed to take his cue from a disapproving off-camera PR woman, responding “I’d rather not talk about that, it’s been well covered actually”, before walking off. It’s the moment all TV interviewers hope for when there’s a tough issue – a walkout always creates a hundred times more fuss than an awkward answer. Any boss with proper media training, let alone one who obviously thinks he’s the cream of the crop, would have been warned that this issue was likely to come up. He should have been ready to engage with it in some way, even if in a pretty bland manner (before moving back to the fact the bonus was because the company was successful, and this is the only reason it could make forward-thinking investments like the new brick factory, etc etc).

After this performance, and the fuss it’s caused, it’s all anyone will want to know about Persimmon. I dare say Mr Fairburn is unlikely to have to worry about another record-breaking bonus next year.

7 November UPDATE: I hadn’t expected this last remark to be so prescient – Jeff Fairburn has today been removed from his role at Persimmon following the row over his pay described above…