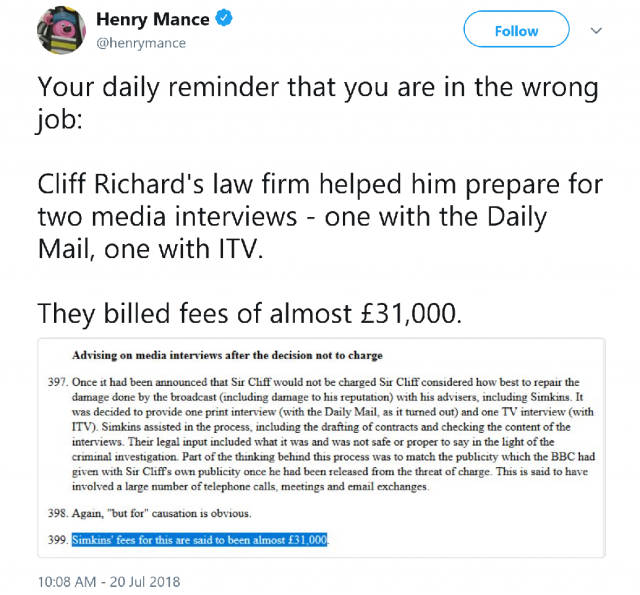 The case of Sir Cliff Richard versus the BBC has raised many questions, and not just about the BBC’s conduct. Sir Cliff understandably feels vindicated after seeing his name dragged through the mud, even though he was never arrested and no charges were brought. However, the ruling restricts the freedom of media organisations, and means that from now on they may not be allowed to report the names of people in such cases before they have been charged, even though, despite this ruling, names will be freely bandied about on social media. This will doubtless lead to accusations from usual conspiracy theorists of “why is the BBC covering this up”, “why aren’t the mainstream media telling us this”, and so on.
For those of us attempting to run realistic, good-value media training, however, there was another surprise, as detailed in the ruling – the fees of nearly £31,000 charged by Sir Cliff’s law firm for its media handling advice for the one print and one TV interview he planned to give after the verdict. This figure attracted a certain amount of comment. It is extraordinary the way people continue to imagine the advice of big law firms must inevitably be good, because they charge so much money for it.
However, it was even more worrying to see a gossip website quote from some of the remarks it claims were rehearsed by Sir Cliff during the interview practice sessions with his crisis management team. Such rehearsals should always remain entirely private.
The disclosure comes hot on the heels of a scandal in the US surrounding the Papa John’s pizza boss John Schnatter, who was forced to resign after using a racial slur during a role-playing exercise with his marketing agency – again, while the word used was highly offensive, we are shocked that this should have been leaked.
So far as Media Training Associates is concerned, anything said during media coaching, and any angles discussed are always purely private and confidential. Even though we are only occasionally asked to sign non-disclosure agreements, our lips remain sealed in all cases and any practice interview recordings are deleted as a matter of course. The bond of trust between “coach” and “coachee” is important; it needs to be mended – and fast.