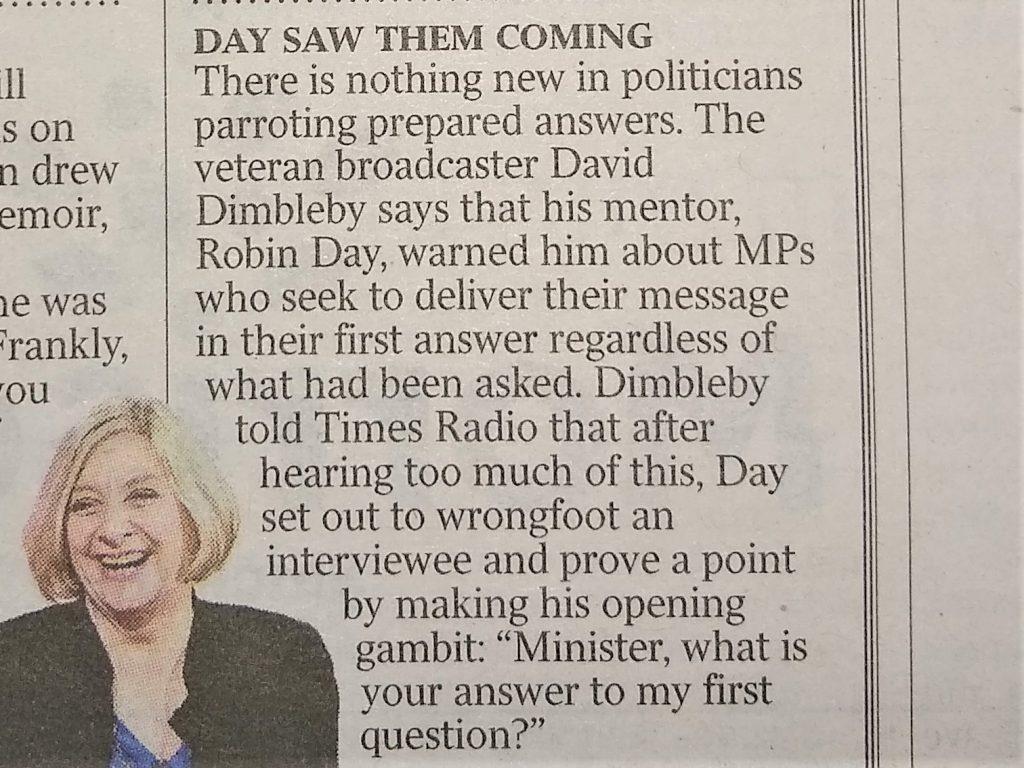 It’s nothing new for politicians to try to avoid answering interviewers’ questions, as an item from The Times TMS diary the other day reminded us. It quotes BBC veteran David Dimbleby recounting an old story from his mentor Sir Robin Day, whose tough interviewing style from the 1950’s right through to the 90’s was said to have transformed the relationship between television and British governments. Fed up with politicians who sought shamelessly to get their message across in the first answer, regardless of what question had been asked, he wrong-footed one serial offender by starting off the interview by asking “Minister, what is your answer to my first question?”

So, how hard should you try to get your key messages into an interview, whatever questions are asked? Of course you need to plan your points and look for the opportunity to get them in. But you still need to think on your feet, and be willing to flex a little if necessary – maybe the interview goes in a completely different direction from what you’d expected. In that case it can sound very clunky if you try to force in a point that is going to sound really irrelevant to the audience, and you will get more benefit simply by answering the question and sounding helpful and knowledgeable. On these occasions, you have to play the long game – better to make a decent impression and raise your media profile as a helpful expert – you’re more likely to get invited back again next time, compared with the interviewee who is clearly there not to help the audience but for his/her own ends. It’s not just Sir Robin and his successors who hate those politicians who never answer the questions! So while your aim should be to make your key points crop up seamlessly in the discussion, don’t try to be too clever – it won’t win you friends.  Next time though, be extra-prepared, so you are less likely to be caught out by an unexpected line of questioning.

More guidance in our Media Training courses, either face to face or via Zoom