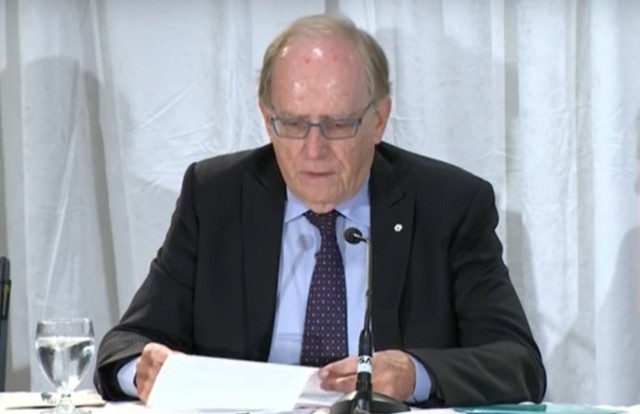 The other day I was waiting in the reception area of a large financial institution, waiting to meet a client.  As is often the case, a big-screen TV in the middle of the wall was tuned to one of the news channels with the sound turned down;  it was carrying the live feed of a press conference.  The scrolling headline spoke of organised Russian doping of athletes at the Sochi Olympics, but all eyes were drawn to the sweaty-looking individual who was speaking, his shiny forehead reflecting the TV lights almost like a mirror.
It’s not a good look.
The shiny dome belonged to Richard McLaren, a well-respected Canadian law professor who had led the investigation into allegations of widespread drug cheating in the Russian team;  on his big day, however, Professor McLaren’s authority was greatly reduced.  It would have made all the difference if the organisers had simply got him to quickly wash his face beforehand, then applied some powder from a compact to ‘dust him down’ to make him look crisp and cool.
The reason this stood out is that usually we see TV presenters who have on layers of professionally-applied makeup as, normally, do their guests.  For them it’s a matter of authority, not vanity.   However from our recent media training client experience, you can’t always rely on the TV station to make you look good.  If you arrive in good time for a BBC News Channel or Sky News appearance you may well get the ‘full hair and make-up’ treatment.  However, the make-up person may be busy or on a break – or in smaller operations, non-existent.   So the smart guest will take things into their own hands, so that viewers will be able to concentrate on the message, rather than a sweaty brow.
For a live TV appearance always arrive in good time so you can nip to the gents/ladies and ensure your hair is neat, your tie if you have one is straight.  The well-organised will have their own powder compact with them and apply a dusting at this point – not the same as a professional job but much better than nothing.  Otherwise, if nobody seems to be offering, don’t be afraid to ask the researcher or producer – ‘I might be a bit sweaty under the lights, have you got a bit of powder?’  They will usually be able to oblige, and it is you who will feel, and most importantly look, so much better.

2 comments on “Sweating it out under the lights”