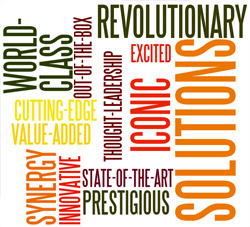 A recent online discussion on ‘ten words to avoid in your press releases’ reminded me that corporate hyperbole, which looks bad enough in a media release or on the company website, is even worse when used by company spokespeople in interviews. There was general agreement among participants that the most over-used jargpn words and phrases in corporate announcements include ‘solutions’, ‘cutting-edge’, ‘synergy’, ‘value-added’, ‘innovative’, ‘world-class’, ‘revolutionary’, ‘iconic’, ‘state of the art’ and ‘prestigious’, plus that old favourite ’we are excited to announce’. Add in ‘thought-leadership’ or ‘out of the box’ and you’ve really got a full house in buzzword bingo. All of these have become so devalued by over-exposure that to most journalists they have little or no meaning. Hacks will almost certainly fail to reproduce them in their articles, so why do the PRs bother?

However, things really take a turn for the worse when the boss drinks too much of his own Kool-Aid and starts spouting this sort of stuff in a radio or television interview. As we try and emphasise in our media training courses, it makes most viewers or listeners wince — or just switch off. The company media relations team will have to dredge up a certain amount of enthusiasm to get the programme interested in the first place, but over-claiming is nearly always counter-productive. If you are the spokesperson faced with this type of challenge, try to retain an enthusiastic style, but think how you would engage your next-door neighbour with the news. You wouldn’t say ‘I’m thrilled to announce I’ve bought this innovative, cutting-edge, world-class new lawn-mower’ (would you?). Apply the same principle if you go on the air.