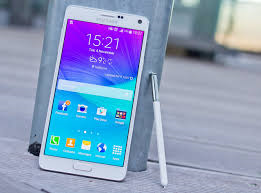 In the wake of the Samsung Galaxy Note 7 burning phone crisis, it’s appropriate to ask what the company could have done differently, and what lessons can be learned.  Samsung seemed to give out mixed messages, suggesting it was doing everything it could to identify the problem, then blaming the batteries, then suggesting that things were sorted, then realising they weren’t, then finally withdrawing the product.  The result?  Lots of lost sales and a $20bn hit to the company’s market capitalisation.  It’s easy to be wise with hindsight, but as the Financial Times pointed out in a coruscating critique of Samsung’s public statements (see below), the longer a company dithers before taking decisive action the bigger the hit to reputation, revenues and market capitalisation.  In fact, Samsung was relatively speedy in its decision-taking.  It was 42 days between the problem coming to public attention and the product being withdrawn.  By contrast, with Volkswagen it took 476 days between the emissions cheating issue emerging internally and a full public admission, during which time VW shares lost nearly half their value. 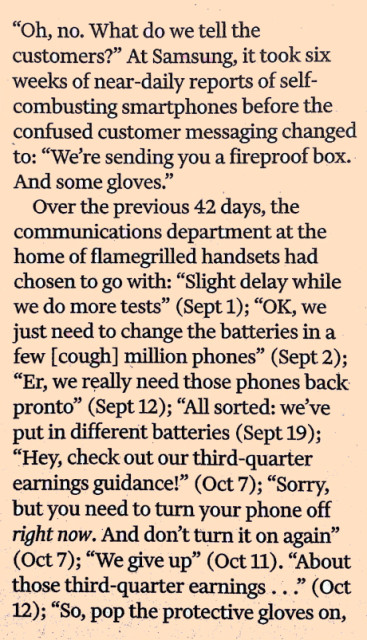 In many respects, the first role of crisis communications should be to reassure customers, so they are not frightened away. If you are a financial institution you want to avoid a run on the bank; with an electronics product it may be more about clearly conveying the fact that the rest of the range is unaffected, and that the company is working night and day to sort the problem, demonstrating decisive action when the fault is clearly identified. Wrong attribution of blame, which then has to be retracted, is much worse than holding off until you really do know what the problem is. Both before and after this point, the key is to be as reassuring as possible both in substance and style. Unfortunately, despite many requests for media interviews from around the world, Samsung kept quiet, leaving commentators and critics to do the talking instead. This is why it is so important for companies to grow or acquire really effective media performers as senior spokespeople. If, with the benefit of high-level media training, these individuals can build up broad experience in the good times, it means they are much more likely to be able to cope under the hot lights in the bad. Everyone knows that sweaty-looking, defensive representatives will only make things worse, particularly in the social media age. Samsung is of course a Korean company, but it could still have had English-speaking as well as local language spokespeople to convey these messages to the global audience, so long as they were convincing-looking and sounding, authoritative, and, yes – reassuring.