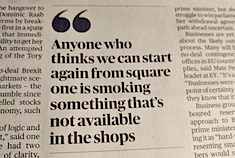 It’s not just what you say, it’s the way that you say it … we work with several clients who are worried about a potential media crisis, but many more who simply want to use the media to raise the profile of their organisation as a leader in their field – or, to employ the over-used phrase, to establish themselves as ‘thought leaders’. If you are not visible in the media, you can’t really influence the debate. But what if, on your favourite topic, you are only saying pretty much what others are saying? In that case, as we tell people in our media training courses, it comes down to whether you can find a more interesting form of words. Journalists are always looking for a snappy phrase that will catch readers’ attention and which can then find its way into the headline, or what’s known as a ‘pull quote’ – a few words taken from the article and put in large type in the middle of the body copy to draw readers in. For instance there has been no shortage of business leaders recently warning of the risks of a no-deal Brexit, but the person the Sunday Times chose to give prominence to was the one who made the point in a wittier manner, saying “Anyone who thinks we can start again from square one is smoking something that’s not available in the shops.” The story about a serviced apartment block in Chelsea owned by a major Tory Party donor which has apparently been used by large numbers of escort agencies, was made extra-memorable by the phrase “ten floors of whores” – once heard, hard to forget. Or, if you prefer, think of the Sage of Omaha himself, Warren Buffett – famous for his pithily-phrased stockmarket wisdom, such as “Be fearful when others are greedy, and greedy when others are fearful” or “someone is sitting in the shade today because someone planted a tree a long time ago”. Take a lesson from Mr B and put a bit of effort into thinking about how you can better capture peoples’ attention instead of using the usual plodding, workaday (or jargon-ridden) phrases. Let us know if you think a ‘messaging workshop’ would be helpful to sharpen up your company’s quotability.

More on our Media Training