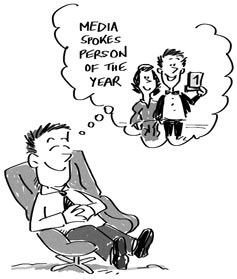 Too often when PR people prepare clients for interview, they focus just on working on the messages they want to get across. They frequently do not dare to practice the really tough questions that might be asked by a journalist who may see the issue from a rather different perspective. In fact, the aim of good media training should be to make client confident, not to turn them into robotic ‘I speak your message’ machines, liable to fall apart the moment the going gets tough. If they fear the awkward issues they won’t have that confidence. The results of going too ‘softly-softly’ beforehand can sometimes be heard on the radio or seen on TV, when an interviewee struggles with the challenge questions and just reverts to a few pious company messages which impress no-one. Most frequently an external media trainer, who has not been involved in creating the corporate or product messages, can ‘kick the tyres’ and come up with the awkward, left-field questions more effectively than the in-house or agency executive who may be too close to things.

Company spokespeople shouldn’t be afraid or apprehensive about being interviewed. Most journalists are actually quite approachable people who just want to get the best article written they can, or put together the liveliest broadcast item. With the obvious exceptions – for example if you have very bad news to impart – their aim is to please their editors rather than to set out to make mincemeat out of you; however they need to be seen to be dealing with the real issues, not as someone who just asks patsy questions. Ideally a company spokesperson needs to be the complete package – someone the reporter instinctively likes and trusts, and who appears open and realistic – as well as someone who says the right things and doesn’t dig a hole for themselves. For most people that means more than just the ability to memorise a few key messages, and should be the real objective of professionally-run media training.

More on what makes a good spokesperson in “The M-factor: media confidence for business leaders and managers” by Tom Maddocks.