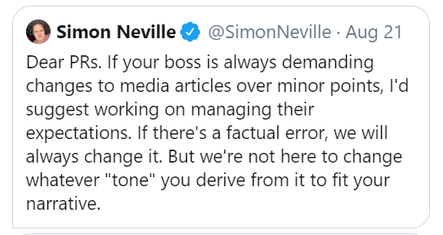 Every PR person would like to be able to control what the media says about their clients. Sometimes they manage to achieve this, but all too often there is the temptation to over-promise. Most journalists have crossed swords at one time or another with meddling PR types who think they can micro-manage the detail of the coverage, and it creates a poor impression, which can lead instead to bad PR.  This month Simon Neville, the City Editor of PA tweeted about the irritation caused when PR people call to try to change the ‘tone’ of a piece. This is not the grounds for a correction, and may indeed raise suspicions. The journalist will start wondering exactly why the client is so sensitive. What are they hiding?
Another tactic for big, newsworthy organisations such as the major high street retailers, is to reward one favoured journalist over the rest of the pack. This could be seen to increase your chance of some positive coverage, but is more likely to blow up in your face, when rival media outlets take umbrage. For instance a couple of weeks ago Frasers, owner of Sports Direct, admitted just one reporter, from the Financial Times, to the group’s results briefing. Cue snarky tweets from the rest of the media pack who had been spurned, and unforgiving coverage from most of them. 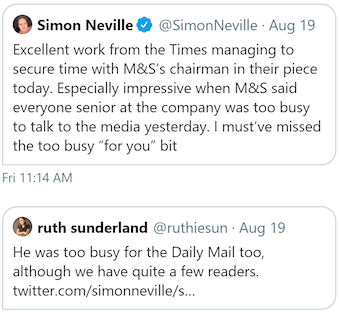 Also on results day, Marks & Spencers chairman Archie Norman gave an interview only to The Times, causing considerable irritation to the mid-market titles such as the Daily Mail – which a lot of M&S customers actually read. It’s not a good look especially when the results are so bad and the job cuts so high. Again, this greatly increased the chances of ‘M&S is going down the tubes’ coverage from the other papers which had been left in the cold.
Much better for big organisations, particularly in the current unforgiving economic climate, to try to keep as many friends as possible in the media, and to be seen to be as transparent as possible rather than hiding away.

More on this in our media training courses