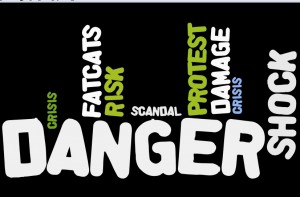 Why is it that major corporations and industries, despite their enormous resources, so often fail to make their voices heard effectively in the media when there are big issues of debate, compared to pressure groups, protest organisations and politicians? Britain’s big six energy companies are the latest to put out ineffective, mixed messages in the face of a political onslaught after recent price rises – an interesting piece in The Times this week by a former Labour adviser lays bare how they have failed to understand the political realities, or use language that will resonate with politicians and voters. But think also of the fracking debate, GM foods, the critics of ‘casino banking’, and so on. This month I was invited to Brussels to address representatives of a large pan-European industry group, which despite its importance to the economy, has suffered for years through tending to follow the debate rather than lead it. It made me wonder why so many large organisations sometimes have such a small voice.

Of course, when there is the impact of new projects such as a gas drilling rig or the high-speed rail link HS2 to consider, it is easier to raise fears than allay them. In addition, we have become so used to the culture of ‘spin’, that we all tend to believe that politicians and big business are not telling us the whole truth, so if a company says ‘we won’t be making excess profits from British consumers’ or ‘this is entirely safe’ we tend to think ‘well they would say that wouldn’t they – what’s the catch?’

If they want to influence public opinion effectively, companies need to be more open and engage with the debate, putting their arguments across forcefully and consistently, rather than staying silent or attempting to position themselves as perfect. They need to become much better at using clear unequivocal language that will resonate with consumers, instead of just putting out corporate press releases that are full of fluff. A protest group’s use of emotive language such as ‘danger’ and ‘devastating’, whether justified or purely scaremongering, is designed to grab the headlines. By contrast, many corporates have become so risk-averse that they are often much more afraid of offending anyone than making their views heard clearly. Even when they have something interesting to say, they often put a draft statement through various committees and sets of lawyers, so that by the time it emerges, it has had all the life sucked from it. Above all, companies need to have convincing, reasonable-sounding spokespeople, chosen because they have an aptitude for communication, not because of their job title. These individuals need to be given serious, high-level media training – to enable them to patiently and reasonably put their industry’s viewpoint across in the media, instead of allowing every senior executive to duck out claiming ‘it’s not my job’ – so their arguments go unheard, and major reputational damage is caused.

More on our media training courses