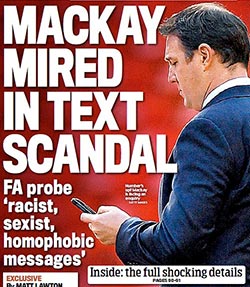 The answer – when it appears so half-hearted that it suggests the individual or organisation doesn’t really mean it, or is in denial about the extent of the offence caused. After the recent disclosure of private texts and emails from former Cardiff City football manager Malky Mackay containing racist, homophobic and anti-Semitic comments, the League Managers Association released a statement apologising for his “letting off steam to a friend” in “friendly text message banter”. The fact that the LMA seems to have hoped that this might put an end to the matter spoke volumes about the prevalent culture within the senior levels of football, and how divorced it has apparently become from what is seen as publicly acceptable.

Sadly there are many other industries, such as financial services, where practices which had apparently become accepted have come to look pretty appalling when subsequently exposed to public scrutiny. Think LIBOR scandals, certain internal Goldman Sachs emails, and so on. So, for company spokespeople faced with dealing with such issues, is the answer always an abject, grovelling apology? Not necessarily. However, what is not acceptable should be properly condemned, not positioned as an excusable blemish in an otherwise sunny picture. Only if the behaviour is truly exceptional should it be put in context, otherwise this can again make things sound worse (“well he only insulted some ethnic groups, and it was only to friends, and anyway lots of other people make remarks like that”). The key then in any broadcast or print interviews is to outline what tough action is being taken to ensure the problem is unlikely to recur, otherwise people will rightly say that you ‘just don’t get it’. In particular, any spokesperson has to work extremely hard to set the right tone, avoiding complacency or defensiveness – appropriate media training to prepare for this is essential. Instead, show the appropriate level of contrition and be as frank and open as possible, otherwise the reputational damage will be all the greater.