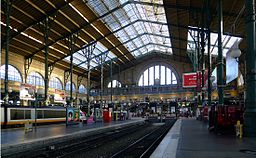 Whatever motivated the boss of John Lewis, Andy Street, to make uncompromisingly derogatory remarks about France and the French at a retail conference in London last month? His remarks caused a furore that was entirely predictable, with the French Embassy in full attack mode and even the French Prime Minister Manuel Valls weighing in to suggest the normally thoughtful retailer must have been drunk. Mr Street said that the country was finished, that nobody cares, nothing works, and that the Gare du Nord station in Paris was the ‘squalor pit of Europe’ (if he really believes this he’s obviously led far too sheltered a life—see picture). This came at a time when John Lewis is launching a new French language website enabling payment in Euros, and it’s never a smart move to insult your customers. So why do it? Mr Street eventually had to issue a personal apology, saying: “The remarks I made were supposed to be light-hearted views, and tongue in cheek.”

Ah, so he was joking. The lesson I’m afraid for anyone in the public eye is that taken out of context, and in black-and-white, ‘humorous’ remarks can easily be made to look deadly serious, and no amount of hasty apology can undo the original offence. Gerald Ratner famously found this out to his cost a few years ago when he described one of his own jewellery store chain’s products as ‘total c**p’, and lived to bitterly regret it. Clients tell me they have suffered similar problems, when light-hearted statements were lost in translation and looked hugely damaging in print. The British sense of humour can also be an issue, when we may knowingly say the exact opposite of what we mean, as with the person who walks out into a thunderstorm with his brolly blown inside out, and then describes the weather to his companion as ‘delightful’. None of this means you mustn’t make jokes with a journalist—in fact you want them to like you and think you a human being. But next time remember that your remarks may be taken rather more literally than you intend, and think what they would look like on the page.