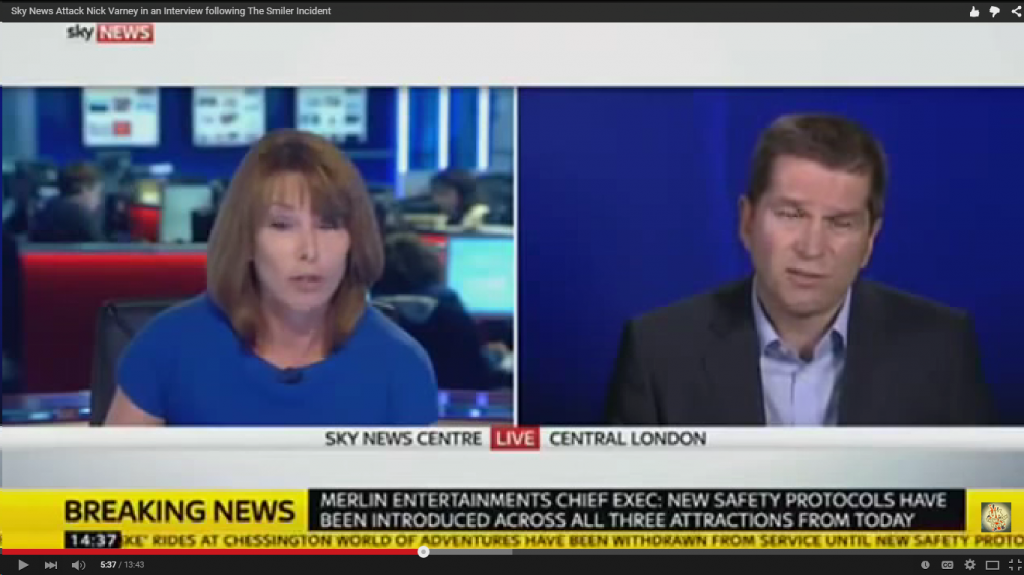 At the last count, more than fifty thousand people had signed an online petition calling for Kay Burley of Sky News to be sacked, after an interview in which she aggressively challenged the boss of Merlin Entertainments over the accident at the company’s Alton Towers theme park, in which four people were seriously injured on the Smiler roller-coaster. Most people would expect a company’s Chief Executive to be given a tough time after such an incident, but it demonstrates just how easy it is for audience sympathy to switch over to the interviewee’s side if the interrogator is felt to be going over the top and lacking impartiality. The public perception seems to be that Merlin acted swiftly and responsibly following the incident, closing the park until new safety measures had been put in place, as well as shutting down similar rides at its other parks on a temporary basis. The company’s officers seemed to be genuinely shocked by what had happened, and concerned for their customers’ well-being. CEO Nick Varney kept his cool during the interview, despite considerable provocation, and judging by the audience reaction, seemed to have the public on his side. It’s quite a contrast with the much-criticised style adopted by Thomas Cook last month after the tragic death of two small children from carbon monoxide poisoning while on one of the company’s holidays. The company didn’t support the family and refused to apologise until far too late.
The lesson for any company spokesperson finding themselves in a similar position is to come out and face the media rather than hide, then show humanity and humility, defend yourself when you believe criticism to be unfair, and be clear about the action you are taking to put things right. You want people to come away concluding that any accident happened despite your good systems and procedures, rather than because of your apparent lack of systems and procedures. Well-handled TV and radio interviews, with properly media trained spokespeople, can go a long way towards achieving this improved public perception – whether the interviewer gives you an over-intense grilling or not.