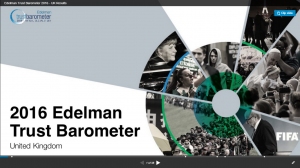 From the various points to emerge from the 2016 Edelman Trust Barometer, which looks at shifts in the public’s level of trust in a variety of institutions including business, government and media, one thing stood out for me. The UK section of the survey indicates that trust in the media is now at its highest level for several years, with ‘traditional’ media such as newspapers, magazines, radio and TV scoring particularly strongly relative to social media. Among what Edelman calls the ‘informed public’ group (college-educated, higher media consumption, high relative household income etc) traditional media is trusted by 70% of respondents, with CEO Ed Williams saying “people tend to turn to familiar sources in troubling times”. By comparison, of the various possible sources of general news and information, 62% trusted online search engines and 43% ‘owned media’ such as company websites and YouTube channels. Overall, the public’s trust in the media rose by three percentage points compared to 2015, while among the ‘informed public’ it jumped by 14%.
Of the various given reasons for this improved trust in the media, 82% of respondents agreed that “we all need more trustworthy information”, 78% that “there is a lot of bad news in the world and I want to be sure I am getting reliable information about it” while 59% agreed that social media was less trustworthy than sources they grew up with. (I would imagine that the fading of the phone-hacking scandal from the collective consciousness may also have something to do with the overall improvement for traditional journalism and news brands.) Either way the findings are interesting, and reinforce my view that press or broadcast coverage, whether consumed via dead trees or a screen, remain key to an organisation’s reputation. Companies that imagine that traditional news sources are declining in importance, and are therefore worthy of less attention than in the past, do so at their peril.